DO YOU HAVE QUESTIONS FOR OUR PRODUCTS? 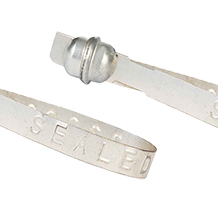 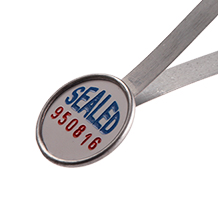 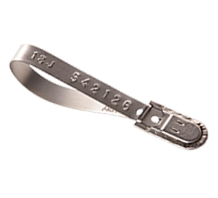 Miladan offers metal seals, which are characterised by having a higher tensile strength than traditional plastic seals.

Our metal seals are applied in tasks where a high tensile strength is required, due to increased risk of the seal being exposed to impact, bending and so on.

This helps in making metal seals a desirable solution in several industries that work with a high level of security. Metal seals provide optimum security and offer a tamper-proof sealing.

Our T-seal is approved by SKAT as a customs seal cf. article 357, 2, annex 46a in the implementing rules for the customs code, according to the Europe Commissions regulation (EEC) No 2454/93 of 2 July 1993, with later changes. This makes the metal seal suitable for tasks where the load protection must comply with certain laws and regulations.

Due to the high tensile strength of the seal, the seal must be removed with a diagonal cutter or a similar tool.

Contact Miladan for advice and guidance on choosing the right sealing solution.

We use cookies on our website to give you the most relevant experience by remembering your preferences and repeat visits. By clicking “Accept”, you consent to the use of ALL the cookies.
Cookie settingsACCEPT
Manage consent

This website uses cookies to improve your experience while you navigate through the website. Out of these, the cookies that are categorized as necessary are stored on your browser as they are essential for the working of basic functionalities of the website. We also use third-party cookies that help us analyze and understand how you use this website. These cookies will be stored in your browser only with your consent. You also have the option to opt-out of these cookies. But opting out of some of these cookies may affect your browsing experience.
Necessary Always Enabled
Necessary cookies are absolutely essential for the website to function properly. This category only includes cookies that ensures basic functionalities and security features of the website. These cookies do not store any personal information.
Non-necessary
Any cookies that may not be particularly necessary for the website to function and is used specifically to collect user personal data via analytics, ads, other embedded contents are termed as non-necessary cookies. It is mandatory to procure user consent prior to running these cookies on your website.
SAVE & ACCEPT